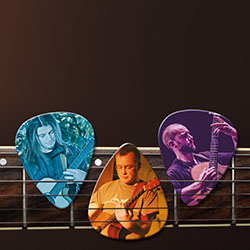 Thomas Leeb – Mickey Murphy – Gary Lutton
Thomas Leeb’s unique guitar style owes as much to percussive techniques as traditional fingerstyle. This Austrian performs throughout the world and has a loyal, considerable following. His album ‘Desert Pirate’ was voted one of the essential albums of the last twenty years by Acoustic Guitar Magazine.
Mickey Murphy is a guitarist and composer from County Down and his solo performances blend original compositions with his own arrangements. He has released two solo albums and played throughout the UK, Ireland and Europe.
Gary Lutton from Belfast was the winner of the UK/Ireland Sky TV competition Guitar Star (2015) during which he had the opportunity to work with Rodrigo y Gabriela, record at Abbey Road Studios and play the main stage at Latitude festival for 30,000 people.